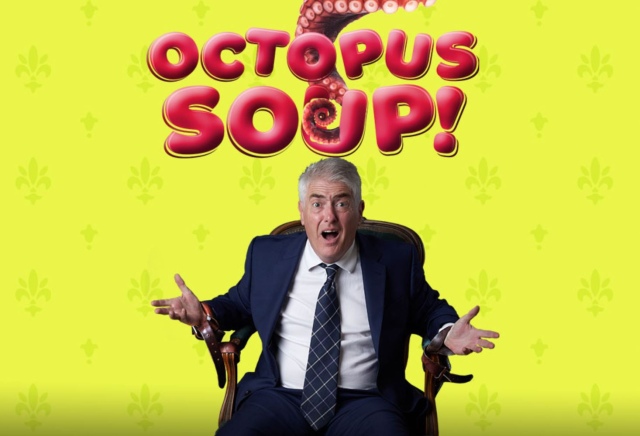 The latest addition to the British farce scene made its way to Cardiff on Tuesday evening, with an eagerly anticipated opening night at the New Theatre. Despite the title sounding like a starter at an upmarket restaurant, Octopus Soup is in fact a story of burglary, insurance fraud, and mob bosses – with the occasional octopus thrown in for good measure. Written by Jack Milner and Mark Stevenson, the play explores the intersection of two, perhaps not so different worlds, when a haphazard burglary attempt results in an unlikely partnership between a criminal organisation and an insurance company.

The play opens with a scene that seems intent on reminding the audience that this is indeed a farce. Seymour Norse – played by Nick Hancock, of They Think It’s All Over, and Room 101 fame – bumbles speechlessly around the stage performing a number of horseplay-like antics. Chief amongst the early gags is an apparent penchant for wearing multiple layers of clothing, which includes the revealing of three pairs of pants, and two belts. Apart from the comedic value, these early scenes are used to emphasise Seymour’s overly cautious nature, and his ‘safest man in Britain’ billing from the programme.

The play really begins to hot up with the introduction of Marvin Haynes (Paul Bradley): the blundering burglar who has a habit of mispronouncing words and phrases, with particular crowd pleasers including: “gross negligee”, “head poncho”, and “Judas Escallop”. Bradley’s comedic timing is excellent from the outset, with Hancock’s sarcastic, holier-than-thou shtick acting as the perfect foil. The pair’s chemistry is one of the standout features of the performance, with a witty, gag-ridden back and forth that consistently produces big laughs. However, as good as the pair are, the true show-stealer is undoubtedly Carolyn Blackhouse’s performance as Seymour’s wife, Gloria. Whilst in the wrong hands, her highly dramatic, overly-neurotic portrayal could well have come across as the clichéd ‘hysterical woman’, Blackhouse executes the role beautifully; dipping her toe just far enough for the laughs, without ever taking the full plunge.

With the plot bubbling nicely, the first act comes to an end as the cast are played off to Bachman Turner Overdrive’s, You Ain’t Seen Nothing Yet – potentially foreshadowing the stronger act that is to follow. Whether this was the intention or not, it is certainly the case. The second act benefits from a full cast on stage for the majority of it, as Gillian Bevan and Eric Richard finally join the fray – playing Seymour and Marvin’s respective bosses. For fans of The Bill who are used to seeing Richards as Sergeant Bob Cryer, his role here as a London gangster has a playful irony to it. Whereas Bevan’s performance as the arrogant face of the corporate elite, provides the audience with the closest thing to a villain.

The ill-fated dinner party that is at the heart of the second act is a masterclass in farce comedy. It is filled with suggestiveness and innuendo, as Seymour and Marvin’s attempts to hide the true nature of their bosses from one another becomes more and more desperate. Whilst the interaction between Bevan, Richards, Hancock, and Bradley is beautifully scripted and expertly acted, the show-stealing moment comes from Blackhouse in a memorable scene in which she “goes method”. Throw an uncooperative octopus into the mix, and act two is really something special.

In many ways, Octopus Soup is a throwback. The comedy is far more slapstick than many of its contemporaries, and you won’t find revolving stages, trap doors, and smoke machines. What lighting and stage effects that are used, are done so sparingly, and are more impactful for it – with clever use of CCTV-like footage and a faux-video call amongst the high points. The focus here is undeniably on the plot and the acting. Despite the bizarre nature of the storyline, Milner and Stevenson manage to unfold it seamlessly, allowing it to build to an almost natural crescendo. Whilst insurance fraud and farce may not appear to be a natural pairing, the combination of great performer-chemistry and clever storytelling allows for a good old-fashioned comedy that may be light on special effects, but is heavy on laughs.

Bringing you the best of what Wales and the UK has to offer. Including Things to do, Places to See and Crucial Daily News! Subscribe now to keep in the loop! View more posts